Home  > NEWS  >  What is the development process of glitter?

What is the development process of glitter?

Glitter costumes play an important role in the festival. I have been lurking in the closet, waiting patiently for the festival and waiting for my appearance. Lively texture, dynamic flashing light, a bit of falling hands, close-fitting and dynamic.

The fashion history of glitters

It is unexpectedly reminiscent of the most prosperous era: the free-spirited new women called flapper in the 1920s and the heyday of the gorgeous Studio54 club.

The luxury of glitters is rooted in the glitter name itself. The word glitter originally evolved from the Arabic sikka (meaning coin), and in medieval Venice, the gold coin was called zecchino. Traditionally, coins are regarded as status symbols and sewed on clothing, and nomads will sew them on clothing so that the property can be personally protected during the journey. By the seventeenth century, coins had been replaced by decorative metal discs. The famous masterpiece was a collection of Victoria & Albert, set with more than 10,000 gold-plated glittered ladies vests. For two centuries after this, these dazzling metal pieces continued to play an important decorative role in women's clothing and accessories. 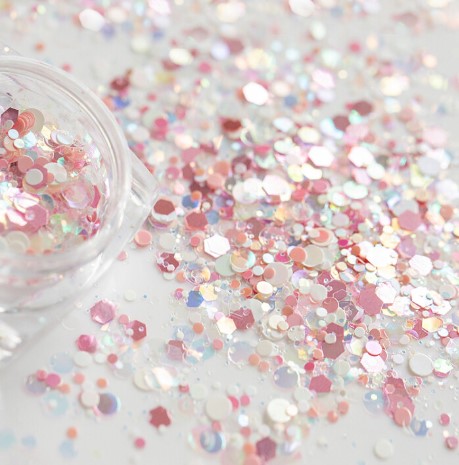 However, it wasn't until the discovery of Tutankhamen's tomb in 1922 that the flash movie boom really broke out. The body of this Egyptian pharaoh, dressed in gorgeous clothes, made of metal flowers in the shape of round metal glitter, shining with golden light, is regarded as preparing for the king's noble afterlife.

The highly recognizable Egyptian motifs later became popular in various fields, including interior design, film and fashion. They are known as the Egyptian boom or the Tutankhamen boom. Famous examples include Leon Bakst ’s design for the Russian Ballet Clothing, and Coco Chanel's high-end ready-to-wear. This kind of decorative clothing that will shine in the nightclub lights was sought after by a new generation of female flapper at that time.

Until the 1930s, glitter was usually made of metal. In the next ten years, glitter made of gelatin appeared, which greatly reduced its weight. Since then, it has been mass-produced and used in high fashion. The tailor of the boutique will patiently nail each glitter to the clothing. Unfortunately, These gelatin flashes are neither heat-resistant nor moisture-resistant and can easily melt. This is why today we see the skirts left over from that era, some of the flashes fall off, especially the positions that are often touched when dancing.

During the Second World War, the flash craze subsided. It was not until the 1950s that glitters began to be made of polyester film, and then they returned. Then they developed into vinyl plastic, which is the material used for glitters today . Recently, designers have tried hard to develop new sustainable raw materials to make glitter, such as Elissa Brunato's cellulose glitter.

Since the 1970s, glitters have been an evergreen tree of fashion flyovers, and this season is no exception: glitter elements appear in entire collections such as Dries Van Noten, including colorful tops like armor, floral dresses and evening handbags; There is Isabel Marant's strong dress, super loose sweater and narrow skirt. This flash continued until spring 2020, such as the Marc Jacobs purple glitter trousers suit, and Fendi's unexpected checkered glitter dress.

The most dazzling moment of the light emitted by the glitter must be during the festival. Since the beginning of King Tutankhamen, glitter costumes have been circulating for a long time. Today, their status is still irreplaceable. It shines with luxury and is a gorgeous and playful incarnation. It's time to wake up the glitter dress and glitter handbags that have been sleeping in the wardrobe for a whole year. Accompanying you to the party will inevitably become the focus of the audience.

Hello, please leave your name and email here before chat online so that we won't miss your message and contact you smoothly.